The Circuit of the Four lagoons is located in the province of Acomayo, in the district of Pomacanchi are these famous lagoons, a distance of 107 km from the city of Cusco (2 hours by car), has created a tourist circuit that allows you to appreciate the four lagoons, this initiative is thanks to the joint effort of about 40 communities in the area, which offer the service of guidance, accommodation and food.

Pomacanchi Lagoon – It is located in the towns of Pomacanchi and the town of Acopia, 14 kilometers from the imperial city of Cusco, in the place there is a crystalline lagoon of 22 square kilometers with a length of 7760 km. 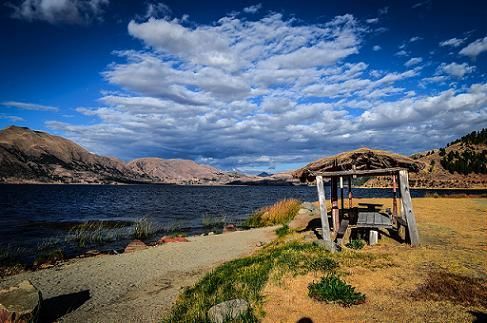 Laguna de Asnaqocha – Etymologically its name comes from the Quechua “Laguna de mal olor”, for the unpleasant emanations it presents, ‘geographically belongs to the district of Acopla.

Pampamarca Lagoon – At an altitude of 3750 m.a.s.l. It concentrates a great variety of flora and fauna: Two varieties of parihuanas, fish, batrachians, birds, insects, mammals, etc.

Plant cover is a natural factor that directly affects soil construction and conservation. It reduces erosion, evaporation, is one of the best means of conservation of the water resource, this in close correlation with the climate, in the area of study is observed: Soils with natural pastures are the highest percentage, followed by Soils for Cultivation especially dry that require irrigation management.

The Bofedales, are lands that are in the plains, those that mainly surround the lagoons and that are frequently humid during the whole year and even has outcrops of underground waters, which determines the existence of a vegetal cover used for the grazing of ovine and bovine cattle especially in the months of summer.

The landscape is one of the potential characteristics of the study area, due to its spatial expression as part of the environment and scenic beauty it houses. The rural landscape is the highest percentage, which increased by the presence of bodies of water, flora, fauna and physiographic conformation determine the landscape unit framing one of the tourist potentials of the area.

FLORAL a existing flora in the study area is classified into formations and representative associations such as: Exotic forest, represented by introduced species such as Eucalyptus globulus (Eucalyptus), some relics of forest with native species such as Escallonia resinosa (Chacchacomo), Polilepis sp (Queuña), Kantua buxifolia (Kantu). The shrub scrub is located above all in the ravine areas, with species such as: Barnadesia hórrida (llaulli), Colletia espinosa (roque), Berberis boliviana (cheqche), Mutisia hirsuta (chinchircoma), Senna birrostris (mutuy), among others.

The grassland and puna grass that make up the chilliguar and iral, with predominant species of the genera Festuca and Muhlembergia and in other areas added Stipa ichu and Stipa obtusa, areas used for grazing.

The hydromorphic zones or bofedales, are characterized for being flooded all the year, with domain of Juncos balticus, Scirpus rigidus (totora) and Scirpus californicus (pusatotora), that as a whole form the totorales that conform the circumlacustre vegetation, being of greater abundance in the lagoons of Pomacanchi and Pampamarca, in smaller percentage in the lagoon of Acopía and the lagoon of Pascocoha for its salinity its presence is even smaller.

The floating vegetation in the water bodies are essentially genera such as Azolla and Cladophora (Lacco), which above all are indicators of degradation processes.

FAUNA Se analyzes in a general way since its distribution is closely related to the presence of habitats and biotypes that provide opportunities for the development of ecological niches typical of Andean areas. Thus it has been observed: Fauna of slopes and bushes composed by animals adapted to the conditions of humidity and temperature, one has: Nothoprocta pentlandii (partridge or llutu), predators and scavengers such as Duscycium culpaeus (Andean fox), Phalcoboenus megalopterus (chinaldina), Falco sparverius (quillincho), Buteo polysoma (aguilucho), mammals: Odocoileus virginianus (grey deer), Hippocamelus antisensis (taruca). The lentic water fauna, with introduced species: Odontesthes bonariensis (pejerrey), Oncorhynchus mykiss (trout); native species: Orestias sp.