The Q’eswachaka bridge is located on the Apurimac River at about 11,811 feet above sea level in the province of Canas about 160 km south of Cusco.

Known as Q’eswachaka (the first syllable is a lateral «click»), Queshuachaca or Keshwa Chaca, this is one of the few remaining examples of Incan hand-woven bridges that were once common in the Inca road system.

«Q’eswachaka» is a native name formed by two Quechua words: «Q’eswa» which means «to braid» and «Chaka» which means «Bridge». This bridge is very special because it is built in the original Inca way, made of a special woven grass (q’oya). The material and construction techniques have been handed down from generation to generation since the Incas, since the first bridge was built in the 15th century. 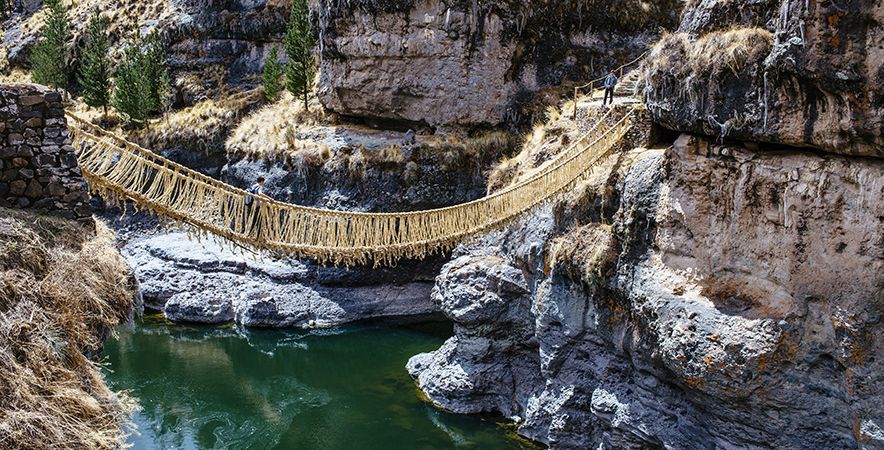 This impressive bridge measures 33 meters long and 1.20 meters wide and rises 15 meters above the river. It is rebuilt each year as a community effort. About 1000 farmers from the communities of Winchiri, Ccolana, Quehue, Chaupibanda and Choccayhua are involved in the construction of this unique Inca suspension bridge.

During this trip, you will also visit the four famous lakes near Cusco and you will pass through typical towns such as Piñipampa, where we can appreciate a handmade tile factory and a fish farm.

Many people who make the Inca Trail. You should also know that there is an undeniable charm in the idea of ​​following the same path that the ancient Incas once used.

However, the Inca Trail is not the only impressive of the Inca Empire. The Incas built a vast and elaborate road system hundreds of kilometers from Colombia to Argentina.

The Incas were master builders of bridges, and these bridges were an integral part of the road system. Qeswachaka, commonly known as the Inca Rope Bridge, is the last of these bridges that is still in use and is located just outside of Cusco in the Quehue District. 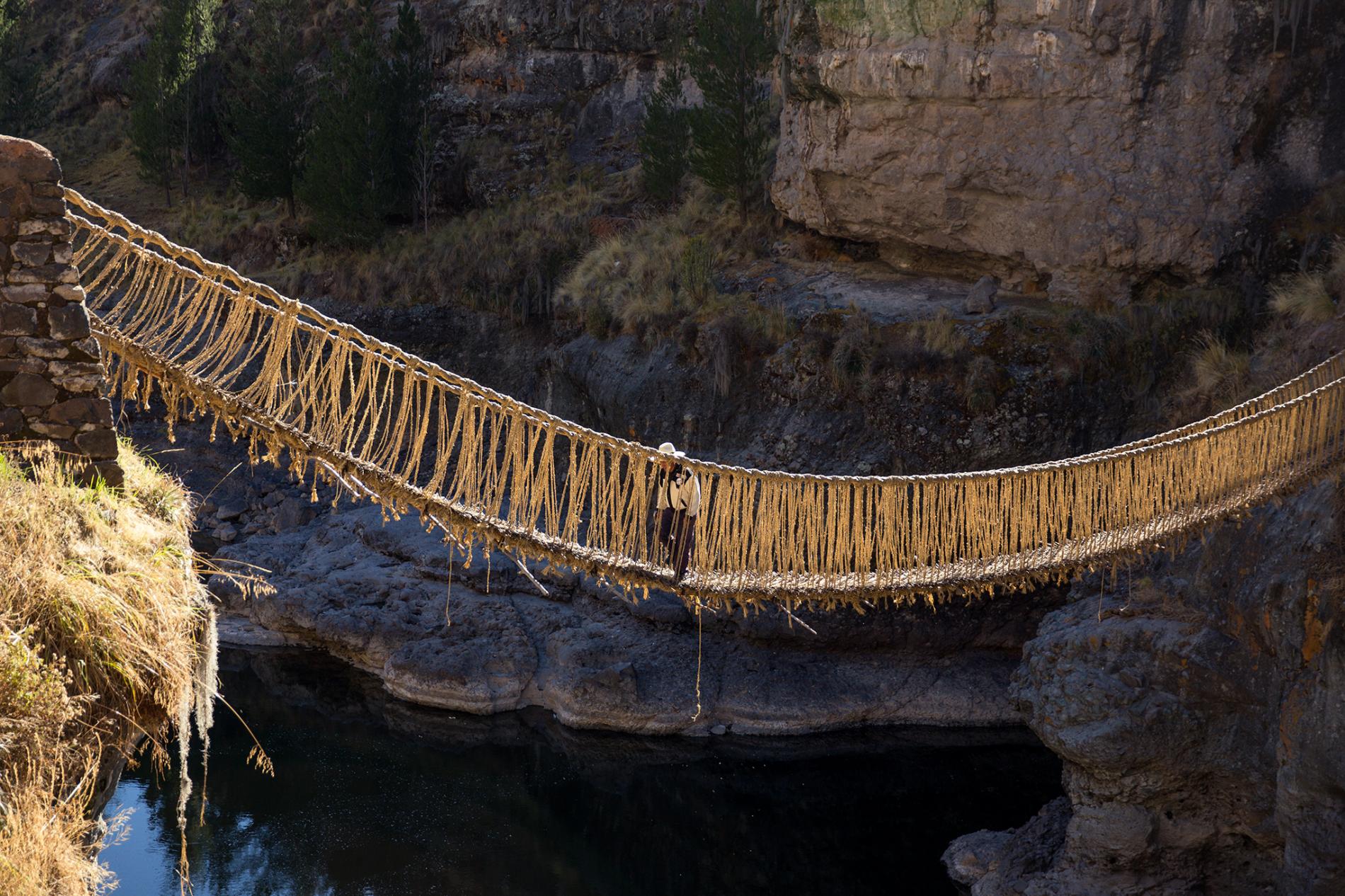 Over time, however, the bridges deteriorated, or were removed, leaving the latter testament to Inca engineering. The sinking of the bridges was resolved by destroying them and reconstructing them in an annual ceremony, originally considered a social obligation under Inca rule, and now preserved as a way to honor their history by the nearby community of Quehue, Peru. This bridge has been baptized with the traditional blessing of an Inca ceremonial bridge and is in very good condition.

Annual Renewal of the Queswachaca Bridge 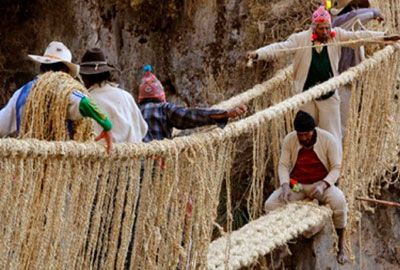 Every June, the Quechua communities gather on the banks of the Apurimac River to renew the bridge. On this day, they manifest their honor to the Pachamama, Mother Earth, and contemplate archaic traditions. When the work ends, people express their gratitude to Apus (mountain spirits) and then celebrate with traditional music, food and drinks.

The Qeswachaka Festival, four days of work and celebration, marks this occasion. This ancient tradition has been carried out annually since the days of the Incas and continues to be an essential connection with the tradition and culture of the high Andes.

Before the festival begins, members of the community collect the construction material, which consists mainly of grass and natural fibers.

These fibers will be woven into the cables used in the construction of the Qeswachaka rope bridge. Before the festival and the construction of the bridge can begin, however, the spiritual leader of the community must ask permission to the applications, or to the spirits of the mountain, to start the process, and make offerings of coca leaves and corn to Pachamama, Mother Earth.

After this offering, the weaving of the cables begins. In the afternoon, the men divide into two groups, one on each side of the bridge, and begin to braid the cables one towards the other.

The second day, the engineers start untying the old ropes, which are fixed to stone nails, and connect the new wires to the pins. This is a long and intricate process, but finally, the base and handrails of the new bridge are in place.

On the third day of the festival the construction of the railings and the path is completed and, once the installation is complete, the bridge is officially opened to the sound of music accompanied by traditional dances.

The party reaches its climax on the fourth day, which is a day of celebration. The communities gather once again to celebrate the completion of the bridge through songs, native dances and traditional foods. This last day is the culmination of all the hard work and a celebration of the enduring traditions that have enabled these communities to keep their vibrant culture alive.

This year, the Q’eswachaka Festival falls during the second week of June, with the critical festival day on the second Sunday of every month.

The reconstruction of the bridge and the subsequent party will be held once again, as every year, while the local communities come together to honor the Pachamama and her ancestors and celebrate their community and their heritage.

Importance of the Q’eswachaka Bridge

The importance of the Q’eswachaka bridge, which crosses the Apurímac River in the province of Canas, Peru, is extensive. To understand the impact this bridge has had on the communities it connects with today, it helps first to understand the history behind the bridge.

When the Great Inca Trail, or Qhapaq Ñan in Quechua, was built, many logistical problems arose. With an extension of almost 25,000 miles, the Inca Trail network crosses many different terrains, including the Andes Mountain Range. To solve the problem of canyons and steep gorges, the Inka was the pioneer of suspension bridges that would allow soldiers, messengers and officers to cross and further expand the reign of their civilization safely. These suspension bridges, which connected previously isolated villages, were essential for the organization and administration of the State and played a crucial role in the social history of the region.

After the fall of the Inca Empire, the bridges survived for centuries and continued to serve as vital links in the Andean road system until the 20th century.

The chroniclers affirm that the Incas used suspension bridges to extend their dominion to new regions as early as the 13th century, when the Inka Mayta Capac conquered the lands west of Cusco, and extended into the 16th century.

The Inka military use of the bridges can be divided into two sections: control of the lands and peoples that are already within the empire and the subjugation of new peoples. Even before the Spaniards reached the empire, it was a common practice in the war to cut bridges or burn them. The objectives were both offensive – to isolate the enemy warriors – and defensive – to stop the invaders or prevent the army itself from thinking of retreating. Once a bridge was destroyed, it took weeks to rebuild it. The bridges also contributed to the fall of the empire, by allowing the Spaniards to cross into Inca territory, although bridges were also burned to prevent the Spaniards from reaching Cusco.

Inka bridges have three common design features: braided natural fiber cables that form the floor and the handrails, stone pillars that anchor the cables on both sides of the bridge, and vertical ties that run between the main cables and the handrails. If we look at modern bridges and compare them with the Q’eswachaka structure, the Inka bridge differs in that the main cables used to create the bridges not only support them, but also serve as walkways.