In the historical center of the city of Cusco, less than 5 minutes walk from the Plaza de Armas, is the Convent of Santo Domingo, built on the ancient Temple of Coricancha (or Qorikancha) known as the temple of the sun or golden temple.

It dates back to the period of the Spanish conquest, when the Pizarro brothers invaded, plundered and fought in the name of the royal crown of Spain so that this Inca temple would pass into the hands of a Catholic religious order and become a convent.

The shape of Coricancha was that of a sun, and the paths that came out of it were the rays that illuminated in the direction of the sacred sites for the Incas (more than 320 sacred places).

But not only the Inca buildings had mythological forms, but the layout of the important cities was also shaped like animals. Cuzco has the shape of a puma or jaguar, and the temple of Coricancha is located in the tail. The second most eminent sacred place of the puma city was the Sacsayhuaman fortress, which is located on the head of the animal.

The part of the Inca temple was known as the gold enclosure. In addition to the gold that was in many of its walls and doors, it was also dedicated to the god Inti (Sun God). But the temple was not only decorated with gold, but there were also even emeralds in the Inca temples, and in the internal walls as well.

The walls of solid stone carved and fitted without any type of mortar or cement, but that later we will enjoy other constructions like: «The fortress of Sacsayhuaman» and in «The ruins of Ollantaytambo».

In the outside part of the enclosure, we can also see this work in stone, calling the attention the exterior western wall that makes a curve of more than 90º degrees, and that was part of the system of platforms of the city.

On the inside there are remains on the walls of the plaster and the paintings with which the Spaniards covered them with images of their saints. But the earthquake of 1650 left to the light the Inca stones that can be seen today inside the church.

There is also a museum in which you can find canvases, clothes, religious objects, and contemporary artworks, giving an idea of the multifunctionality of this space today, since it holds everything from masses to concerts, art exhibitions, plays and almost any cultural performance you can imagine in the city of Cuzco.

Useful information to visit the Temple of Coricancha:

Location: At the intersection of Avenida del Sol and Calle Santo Domingo.

Less than 5 minutes from the Plaza de Armas of Cuzco.

What does coricancha mean?

Temple of gold or is also called Coricancha or Qorikancha was a main ceremonial temple in Inca times, the temple was destroyed and looted in the conquest of the Spanish, the place was rebuilt and is located in the imperial city of Cusco – Peru.

It was built in the Inca era with the Inca ruler Huiracocha, around 1200 A.D. It was improved the Ceremonial Palace and became one of the best Inca ceremonial palaces in the government of the Inca Pacha.

Who does the Coricancha temple in Cusco honor?

Over the years, the largest temple in the Inca state was built here. The great reformer of the empire, Inca Pachakuteq, rebuilt the sanctuary and endowed it with fabulous riches, which is why it was given the name Qorikancha, which means in Quechua «Golden Fence».

Why is the Temple of the Sun important?

Possibly the most sacred and important building of the Tahuantinsuyo empire, Coricancha was the name given to the Inca Temple of the Sun. At the time of the conquest, the temple was destroyed and plundered

What is the Coricancha?

The Coricancha is a temple located in Peru, specifically in Cusco. This is the maximum representation of the union of the Inca culture with the Hispanic culture, since, it is a political and religious center that identifies both. In the same way, it is one of the most honored and respected of the whole city in which it is located.

What does his name mean?

Temple of gold or is also called Coricancha or Qorikancha was a main ceremonial temple in Inca times, the temple was destroyed and looted in the conquest of the Spanish, the place was rebuilt and is located in the imperial city of Cusco – Peru.

Where it is located?

A few meters from the Plaza de Armas, on Cusco’s Av. el Sol

How to get to the Coricancha?

If you are in the city of Cusco, you can take a taxi, which depending on your location can charge you between 3 and 20 soles if you are very far from the center of the city; the area is very quiet and touristy

What to see in the Coricancha?

In the Qoricancha the stones used inside were carefully worked, they have slight padding on the sides that express the sober aesthetics of the construction in the Inca Empire.

From the place, you can also have a beautiful view of the gardens where part of the Inti Raymi festival is celebrated today. Have you already met him? Go and visit it.

How to visit the Coricancha?

How much does the ticket to the Coricancha cost?

How much does a tour of the Coricancha cost?

You can visit the Coricancha temple in any of our tours inside the city if you are interested in visiting this beautiful Inca and Colonial site, it is already included in Our City Tour Cusco

Generally the climate in Cusco is severe and quite hard but without going to extremes, the average annual temperature reaches 12°, sometimes rising to 18° in the mornings, and falling to 6° at night.

The ideal season for a visit to Cusco is between June and October, since at that time the sun shines almost permanently and although the days can, it is not at all uncomfortable. At night, temperatures drop to approximately 10 degrees Celsius, but the advantage is that there are no heavy rains, which is the case during the rainy season from December to April.

What are the opening hours in the Coricancha?

There is a lot of information about Peru, however, there is very little updated as a guide to Machu Picchu for 2022.

Where can you find Machu Picchu?

Before going to Machu Picchu Travel Guide, you will have to get to the small city at the foot of the mountain. This town is known as Aguas Calientes, while some locals may also call it Machu Picchu Pueblo.

There is no direct road to Aguas Calientes. You will have to use several methods, including the car, the train or even walking (not too much).

How to get to Machu Picchu

How you get there depends on your personal preferences, you can choose between a walk or a bus ride to Machu Picchu.

You will need a ticket to enter Machu Picchu, these can be purchased online in advance or at various ticket offices in Cusco, but are in short supply.

There are only 2500 available per day, with entrance to Huayna Picchu and Machu Picchu Mountain each having even less with 400 per day.

Please note that these tickets cannot be purchased at the door of Machu Picchu and may sell out weeks in advance, so we recommend that you purchase your Machu Picchu tickets well in advance. 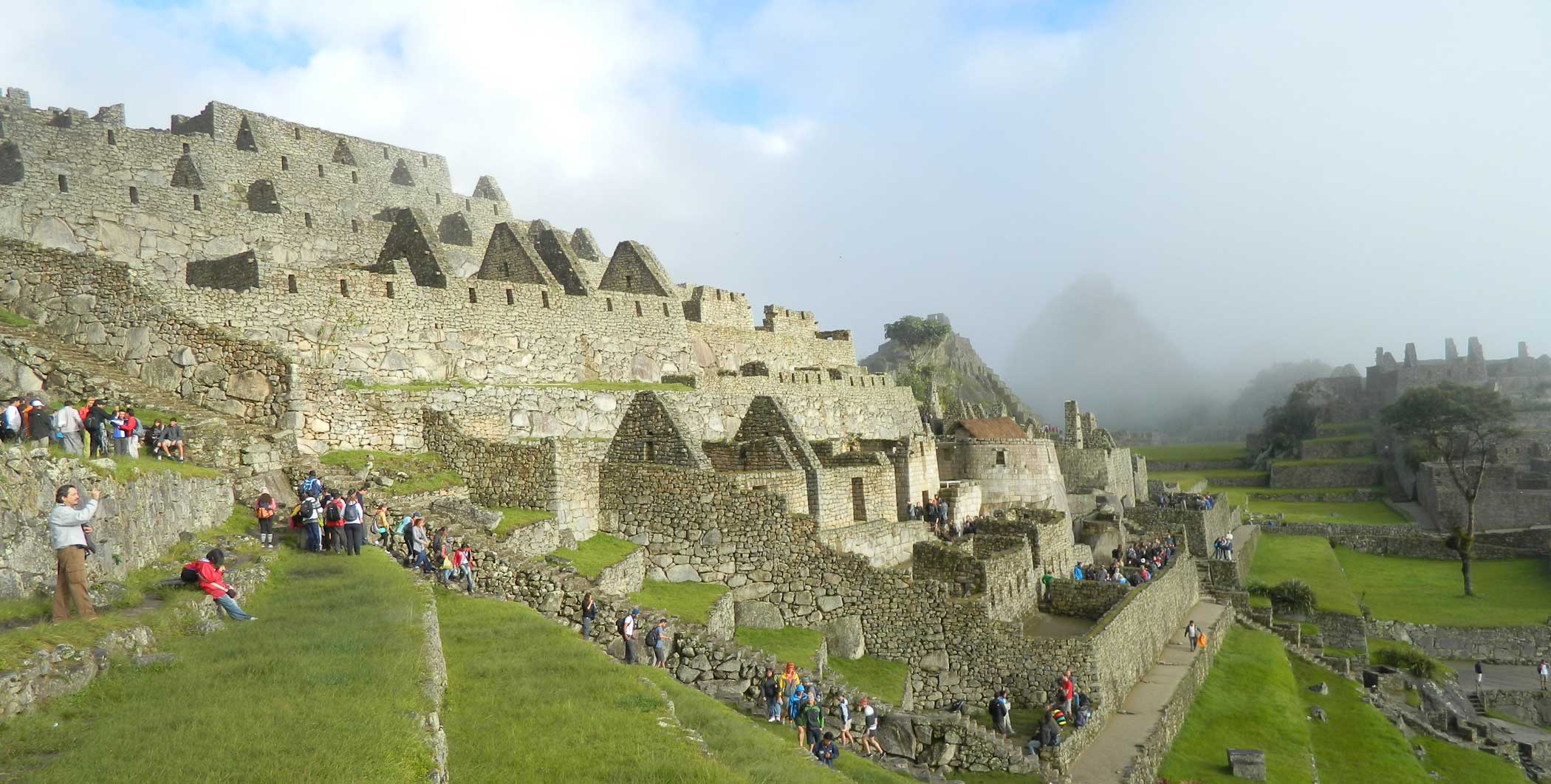 The next part of our guide to Machu Picchu has to do with the highest peak in the area. The most sought-after hike within Machu Picchu, the peak of Huayna Picchu mountain is lined with Inca structures that turn towards the summit at 2,720 m.a.s.l.

Most travelers take between 45 minutes and 1 hour and 30 minutes to reach the top of the mountain, depending on their physical condition.

The views from the summit are truly out of this world with a backdrop consisting of ancient temples and lush vegetation with Machu Picchu at its center. 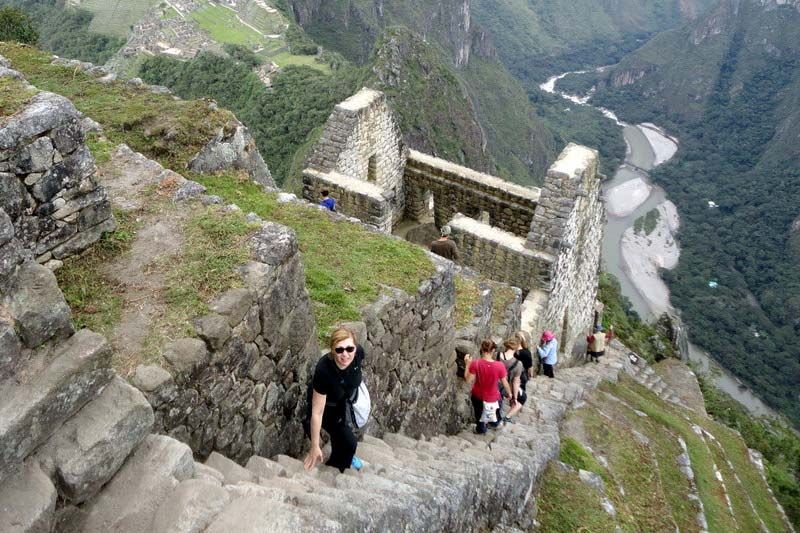 Another amazing peak you can include as part of your Machu Picchu excursion would be «Machu Picchu Montana» which is located in the southwest corner of the citadel.

It is a little longer than the Huayna Picchu, less crowded and much less difficult, but it offers incredible views of the surrounding area. It can take from 1 hour and 30 minutes to 2 hours to reach the top.

They are different from each place that lie in their designs, Huayna Picchu mountain is a straight vertical hike and the other mountain is winding around the mountain.